as I wrote long time ago in Geografie Alternative (note number 5), in order to break our crystallized idea of the world there are several ways to manipulate the maps, connecting peoples and places, breaking frontiers and implementing the unity of the whole humanity in our planet.
one of these subversive methods of re-creating the world is mixing the names of the places in a random way. It's obvious that generally you are always expecting to read Boston near New York, both inside the United States, part of North America, but how weird and shocking could be reading Kandahar in the place of New York, near Peking and Lima, all of them part of Syria.
Suddenly these names that always existed in a very theoretical way, far even from our idea of the world, are now in our houses, in our neighbourhoods. they are near! they are us!

This was the original idea, but making it real in a proper way it's really a tough job.
I decided instead to make an easier and more naïve system. I just shifted the names of each country to the next one in the alphabetical ordered list of world countries.
so in Afghanistan you'll find Albania, cause Albania is the next country in alphabetical order. 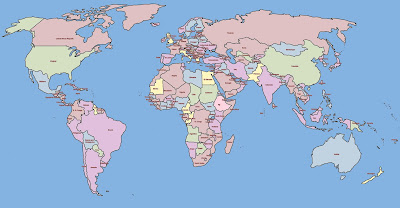 Now imagine that all the people and governments of these countries have really to move to their new places in the earth. A big mess, for sure! but can you imagine the marvellous cultural new opportunities of staying in the USA, crossing some km's of sea landing in Gabon, and by car, easily soon reaching Belize, New Zealand and finally entering Ghana territory? That's exactly what would happen in this map. 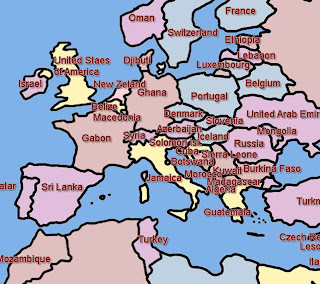 you can open this image and watching how the continent are now mixed: all of them are scattered out around the planet! now you cannot say any longer that Africa is all poor and Western Europe is all rich. it depends. they are mixed, they are overlapped, they are all around.

look for example how divided is the European Union. This division is not a wall or a border, it's a dilution, a mixture inside the fruit salad of all the countries. it's a richness! congratulations EU fortress! now you're finally a part of the world!

It could be also interesting to see how history would change in this kind of map, I mean all the historical events are now in a new chess-board: look how was the travel of Cristoforo Colombo, starting from Italy, going to ask to Portugal Crown to realize his project, going finally to Spain and from there going to the western Indias touching first the soil of the Hispaniola island, presently the Dominican Republic. 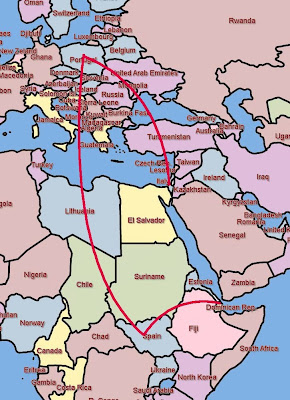