If you just have a look to the previous post "looking south" you can find interesting geographic notions about the countries that have direct connection to Antarctica through the oceans, just going southward.
That's already quite interesting for someone interested in geo-stuffs, but what about the connections between countries beyond the south pole, that is, crossing Antarctica?

That's even more interesting!
And it's also something that captain Shackleton studied very well, for sure!
I mean, that's something that's generally difficult to visualise in an intuitive way when you look at a conventional two-dimensional map of the world: in almost all the typical world map representations the north-pole and the south-pole are open and deformed into the top edge and the bottom edge of the map.
But in reality these edges are just two points that you can cross when you follow a north (or south) perfect line. And what's beyond this point? Back to the world map! A anti-intuitive connection is now linking two countries that appear very far in the world map!

The south-pointing-line that we drew starting from an aleatory shore point in a casual country of the world, is going down in the map until it touches the bottom edge of the map, and it pops up again from another point of the map, this time going northward, and finally touching another shore line of another country.

And which country is in connection with which other country?
That can be quite interesting, indeed: for example, did you know that starting from almost every Indian shore and going south, crossing the south-pole and going straight forward you'll reach Mexico?
Here you have the southern-connection map of the world! Have a look it's interesting! 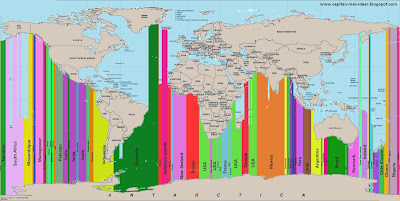 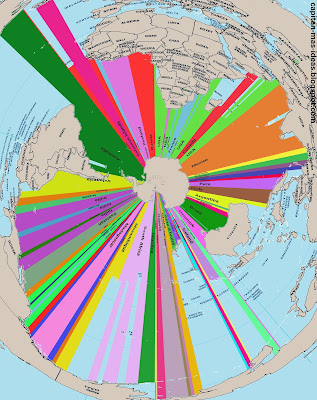