in the same way I realized the post "seas of the moon" here below I decided to do the same with some of the solid planets of our solar system that are similar to our planet earth. so, why not to start with Mars, our twin planet that probably used to host life in ancient times in the same way earth does?

so, the process is the same and it's quite easy: you take an image you can easily find in the net showing the elevations of the red planet, like this: 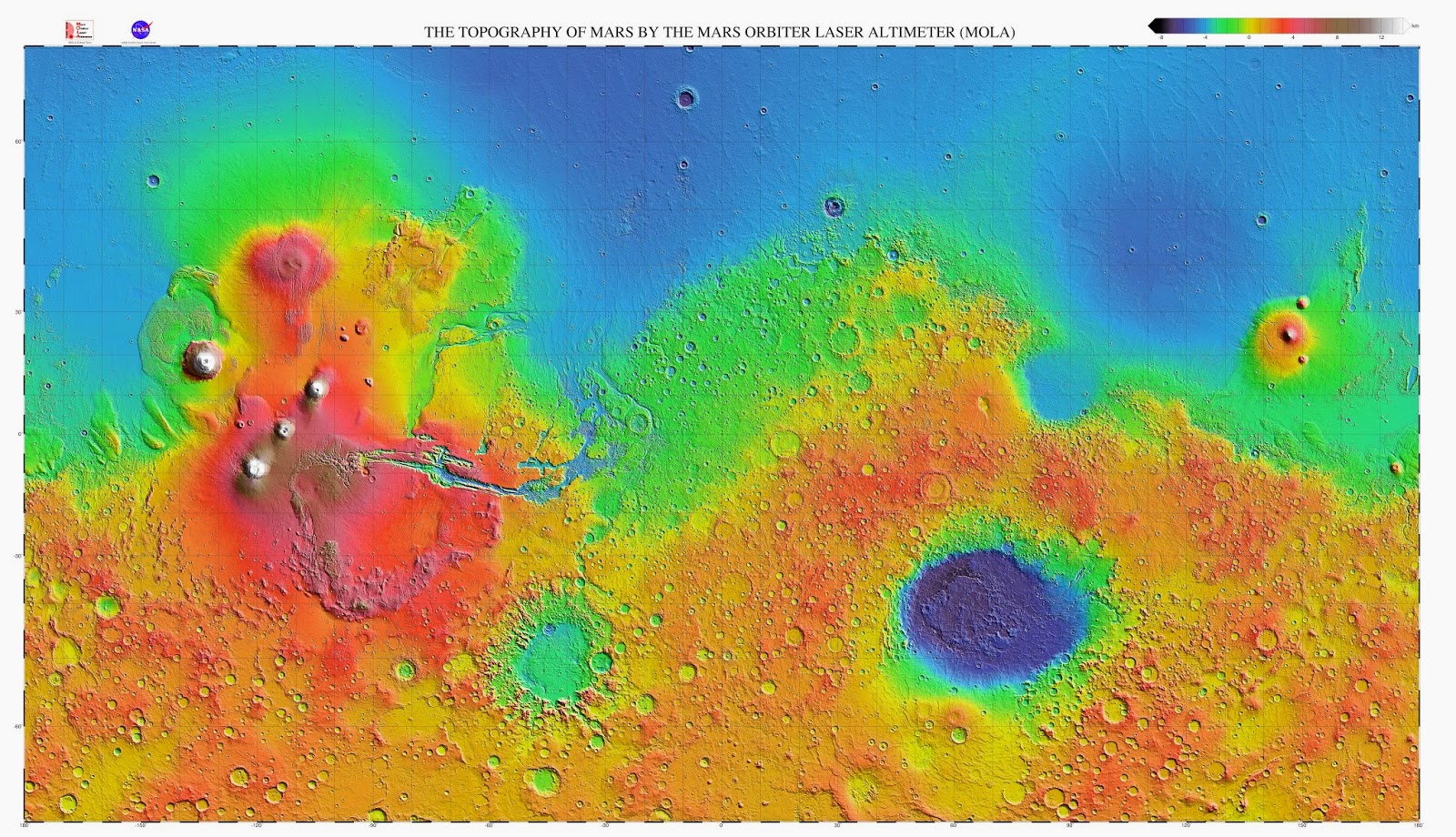 now you just have to select the colours that represent the lower elevations and put a blue colour of an ocean in the selected areas. in this way you'll represent the way the waters would fill the surface of the planet if there were the right conditions.
here you have the first result: 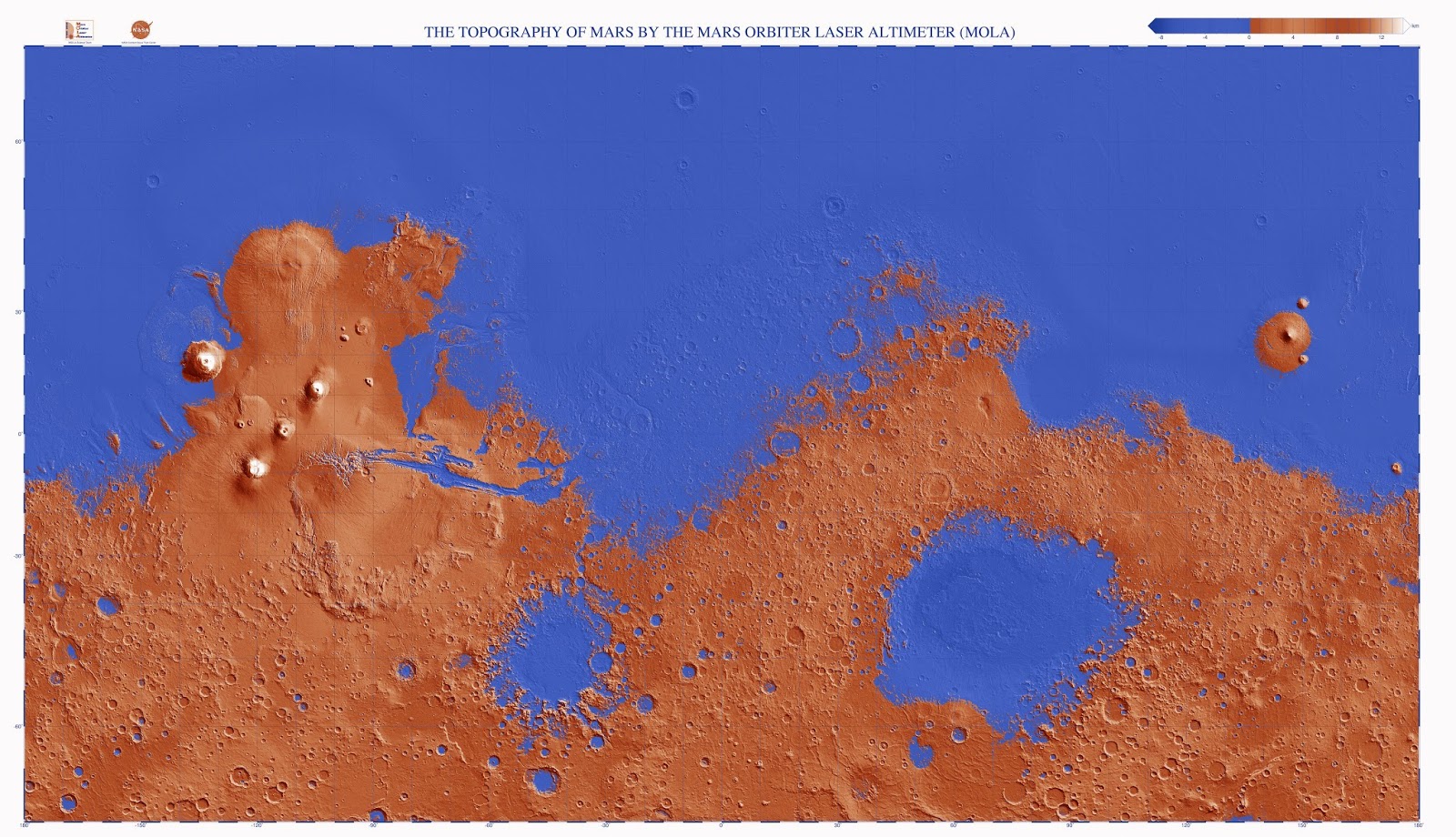 but this is not enough! this image represents the lands that would be covered by waters and the areas that would remain dry and elevated over the level of the seas, but if we imagine that waters would come back to planet Mars we can also imagine that the atmosphere would come back to it as it was in ancient times, so this could permit the creation of a new process of life!
if we make the easiest comparison between Mars and Earth and we imagine the lands would be covered by plants processing the light in the same way they do in our planet we can represent a green layer over the red soil of Mars, and we can also imagine winds and sea streams would work in the same way there in Mars as here in the Earth. so we should think about the presence of ice in the poles and of deserts in the tropics lines.
so, here you have the new face of the red planet if life (as we think on earth) would come back in that planet: 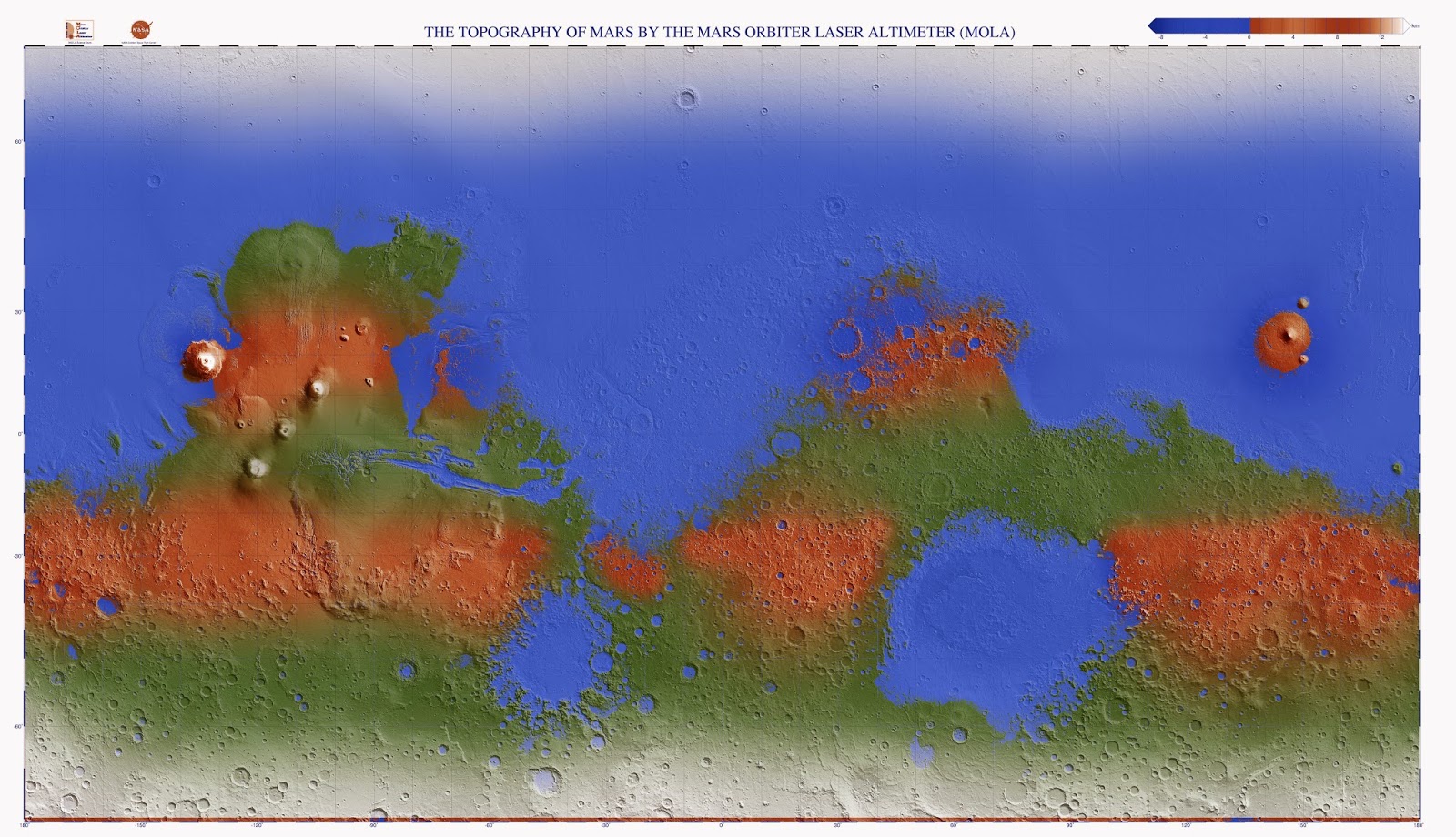 and now, to finish this imaginative perspective over Mars, let's pass from the mercator's projection of the map of the planet to a spherical representation of the new living condition of our twin planet:
here you have the new look of Mars, the living planet! 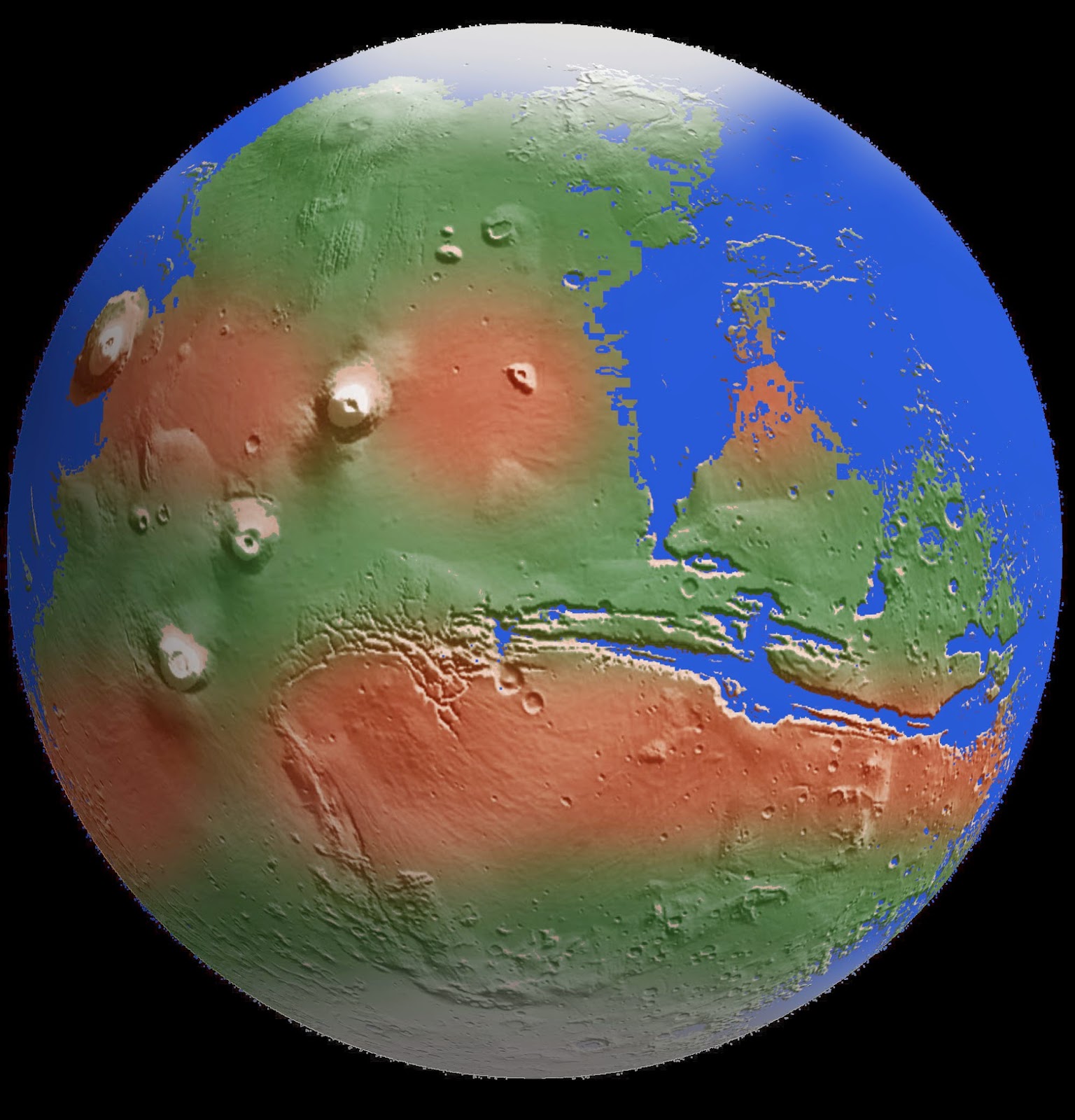 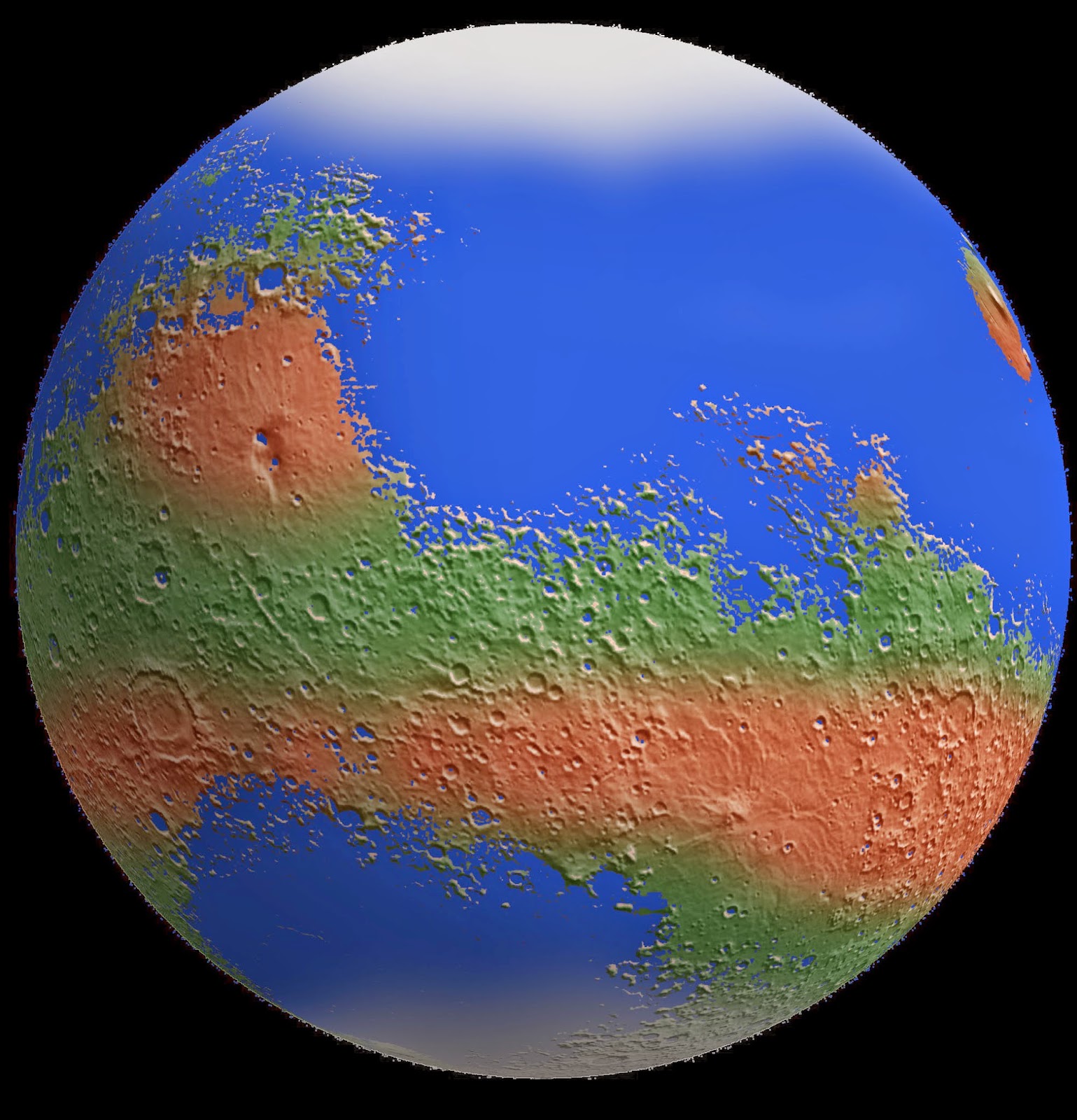