As I already explained in the post called Densely Populated Americas it's very interesting to show a political world map removing the sparsely populated areas of the world.
This is because borders are a concept that makes sense only in presence of different communities of humans. A border, itself, is nothing for a single man lost in a desert. It's for this reason that is very interesting to see how big human communities interacts depending on the borders, through the borders or how they are "trapped" inside the same border, but they are far human islands that have almost nothing to share with far concentrations of humans which are not in contact with.

If you want to go a bit deeper on this idea, please read "Densely Populated Americas".

Now here I finally finished the World map, made with the same concept, and here you have the result:

As you can notice the areas of the World that are visible, are the ones that are actually considered the most densely populated as you can check with the map here below:

The specific inside for the Americas is already presented in the previous post, but here we can see the case of Africa, for instance.
First of all, in this map, the disappearance of the deserts and the forested regions gives us a clear idea of which part of Africa is considered the "Black Africa" and which is the Arabic North Africa and why this areas are so different in terms of culture, traditions, human types, languages and so on: there's a sort of "ocean" between these two worlds.
Something that's also interesting is to notice that every country in Africa still appears in the map. Big extended countries are sometimes reduced to very small spots (Libya, Chad, Mauritania, Namibia, Botswana...) but there in this spot there's almost always the political and ethnic power of this country.
It's also interesting to notice how the "white" area of South Africa is only a very tiny, small and isolated point lost westwards of the real populated regions of that county that are the lands of the Zulus, the Xhosa and other African tribes. 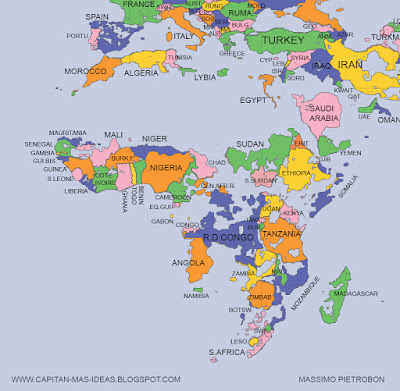 As it happens for countries that have very wide extensions of deserts, Australia is almost invisible in the world map! We need a special zoom on it to have an idea or where are the visible regions of this country. This sparse density of population contributes to give the idea that Australia is only a big desert, to the eyes of the rest of the world. This is completely false: Australia presents several different climates which pass from tropical to a sort of English weather.
But anyway, the population is really small, so the impact of Australia in this map is almost invisible. 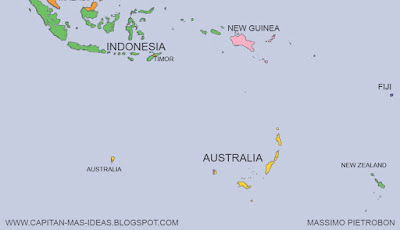