What is a political map? It's a map that shows the "imaginary" human limits on the surfaces of the lands of our planet.
A political map is essentially a human related point of view of the world.
That is obvious, of course, but this concept implies another conclusion, and that's it: where no human beings dwell a territory, borders are practically insignificant.
Of course there are strong economical and geo-political interests in desert areas of the planet, but this is only a strategical purpose: assuring power to a community by means of expanding control over potentially useful zones.
But if we come back to a "human point of view" it's interesting to notice how deserts, as well as oceans and seas or wide extensions of forests and ices, they all represent only a great distance to overcome in order to get connected to other human beings' communities.
They are only "territories to cross" let's say and they present for sure some difficulty for humans to live in.
What I'm trying to say it's that a conventional "political map of the world" is somehow mostly a "strategical map of the world", and by human point of view it's more interesting associating borders and countries only to the areas that are dwelled by humans. This gives a better idea of how human beings are connected, divided and organized.

For this reason I'm developing a "political map of the world" that considers only the regions with a medium-high density of population and that makes disappear the desert areas.

Here below you have a sample: the Americas, by counties; but only the populated regions. 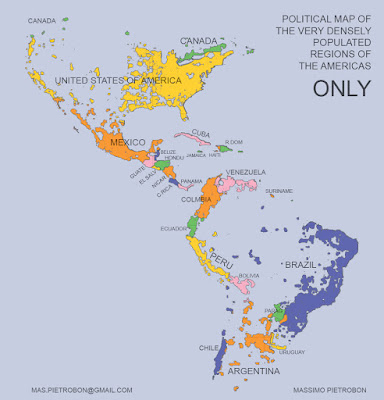 Someone could say that's not correct to do this because even if sparsely populated regions are almost desert, there are still people living there, and they are also citizens of their respective countries.
That's true, for sure, but it's also true that the "presence" of the central government of a nation is more loose in areas in which nature is still the real power.
In these terms, human organizations count less in almost desert lands, it's for this reason that I just overlapped a map of population density of the Americas, with a conventional political map of the same continents. 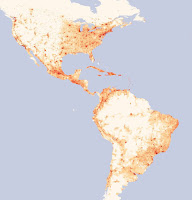 The result is really interesting to me. It makes also clearer some population proportions and some internal human dynamics of several countries.
For example the presence of Canada is really small. Indeed the population of this country is much smaller than others (this is something that is difficult to notice in a typical political map of the world).
It's also interesting to notice how some regions of Mexico or Brazil are like "far islands" for the main core of the nation, but they are very near to the border of some other country (the USA or Peru, for instance) and this makes clear that for the inhabitants of these areas the influence of the nearer human community is stronger than the feeling of union with the rest of their own nation, in some case.

These analysis are really interesting, and I strongly suggest you to watch carefully any detail of this map in order to notice new surprising connections and disconnections that a conventional map never shows.

Further on I will finish my world map with the same concept.
I hope you liked it