if the poles are melting down, and the ice in the poles are decreasing, don't worry! we can always create a pole protector!
the heat on the earth surface depends mainly by the direct exposition to the sun: summer is when the exposition to direct sun beams is bigger. winter is when is not so direct.
that means of course that if the sun is covered obviously the temperature on the earth is lower. that's clear!
so if in the future the risk of all the poles melting down would be too high (and if it'd be too dangerous for mankind) it would be sufficient to send to the outer space a satellite like a big umbrella.

that means a huuuuge satellite!
its duty would be just covering the sun, creating a permanent eclipse. that's all.
ladies and gentlemen, the poles are now safe! 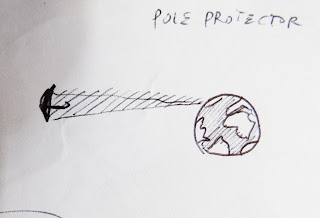 of course I don't believe this is an available solution, but it's just a big utopia that doesn't take in consideration the impossibility of construction of such a big "umbrella" nor the climate disequilibrium which this artificial intervention would provoke. it's just a utopia...